Arrival in Panicale one of the most beautiful villages in Italy at 17:00

Panicale owes its appearance to the medieval origins of which it still retains all the structural features and architecture. The plan of the country in concentric circles represents one of the most advanced systems of military defense in the later levels typical of the medieval era. In fact, this type of defensive structure allowed the castle to Panicale to resist numerous attacks to which he was subjected.

We'll move to Mongiovino around 18:00 where we will visit the Shrine before Mongiovino that holds within it a picture of the Madonna became famous because in this painting were attributed several miracles.

The plan of the Greek cross church, within the dome supported by four square pillars and vaults.
The interior decorations are in Corinthian style.
The exterior of the church decorated for each side by four pillars.
Many were stonemasons who worked at the Shrine of Our Lady of Mongiovino among which: Lorenzo da Carrara and Bernardino da Siena who decorated with bas-reliefs and round the jambs of the arches of the portals embellishing them with decorations of exceptional beauty.

Mongiovino always been a place of Marian veneration; a particular devotion was reserved for an 'image of the Virgin depicted in a newsstand, forgotten among the bushes, near a spring source in the proximity of the ancient church of San Martino (also dedicated to Saint George in memory of the miracle of the multiplication of Tablet April 13, 1513), adjacent to the sanctuary.

The system of centrally planned church with a Greek cross, the octagonal dome. The whole plant has architectural features and structural properties that refer to Bramante, even if you have not found any relevant document certifying the assignment to him of the project; This scheme builds models already adopted '400.
The bell tower, with two rows of overlapping gables in red brick, dating from 1775, designed by the 'architect Francesco Tiroli and executed by Giovan Battista da Lugano. Even here there are elements with strong symbolic value as a representation of the Virgin of attributes already prefigured in the Apocalypse and present in the litanies of the Rosary.

Also interesting is the territorial framework: in the fifteenth and sixteenth centuries, together with that of Mongiovino were built in the area, also other shrines that form a veritable crown around Lake Trasimeno: the Grondici at Castiglion Fosco, S. Maria dei Miracoli in Castel Rigone, the Madonna in Passignano Olivet, Our Lady of Carraja at Panicarola, Our Lady of Liming and S. Maria Nuova in Cortona, and other minor items. Over all, however, stands the Sanctuary of Mongiovino for originality and completeness of the apparatus both architectural and decorative.

After visiting the shrine will get to know the owner of 'Company olive Castle Mongiovino Doctors Dr. Ettore Guerrieri, the estate there are about 6000 olive trees with a predominance of the mill, and moraiolo leccino:

therefore could not miss the mill that is located in the center of the farm, in the middle of an olive grove, in front of Panicale.

In the time of collection which usually starts between late October and early November, depending on the weather, the oil that is collected during the day is immediately ground so that the product is extra virgin olive oil of low acidity and maintains intact perfumes and fragrance.
The method of working is very unique: we are dealing with a system called "Baglioni" from the name of the man who invented and patented system of which there are very few examples in the world.

The particularity lies in the fact that the extraction procedure is constituted by a simple cold pressing at high pressure progressive (limit 600 Kg / cm) of the substance oleaginous previously minced with a mobile crusher and layered with a filtrodrenaggio granules made ​​with material that belongs to the fruit same, that is the crux of the olive.

After tasting assist at 19.30 in the Sanctuary of the Madonna of the Mongiovino Music Concert Together Panicale:

Expected return to collection points around 22:00 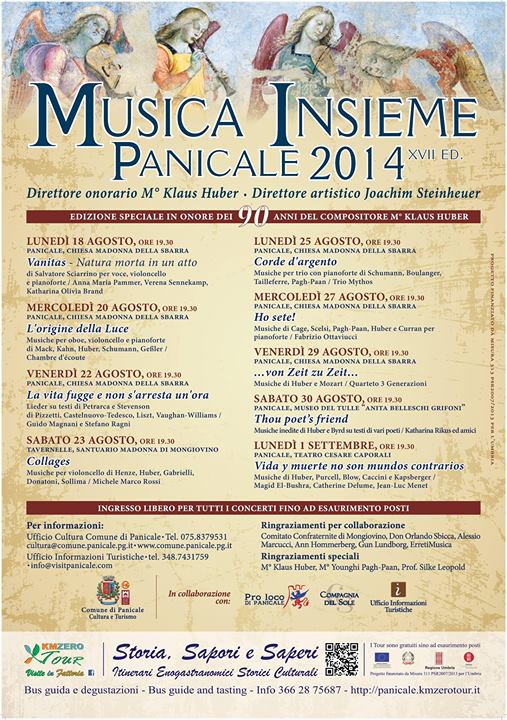